The future of hierarchy - from direction to alignment

The future of hierarchy – from direction to alignment 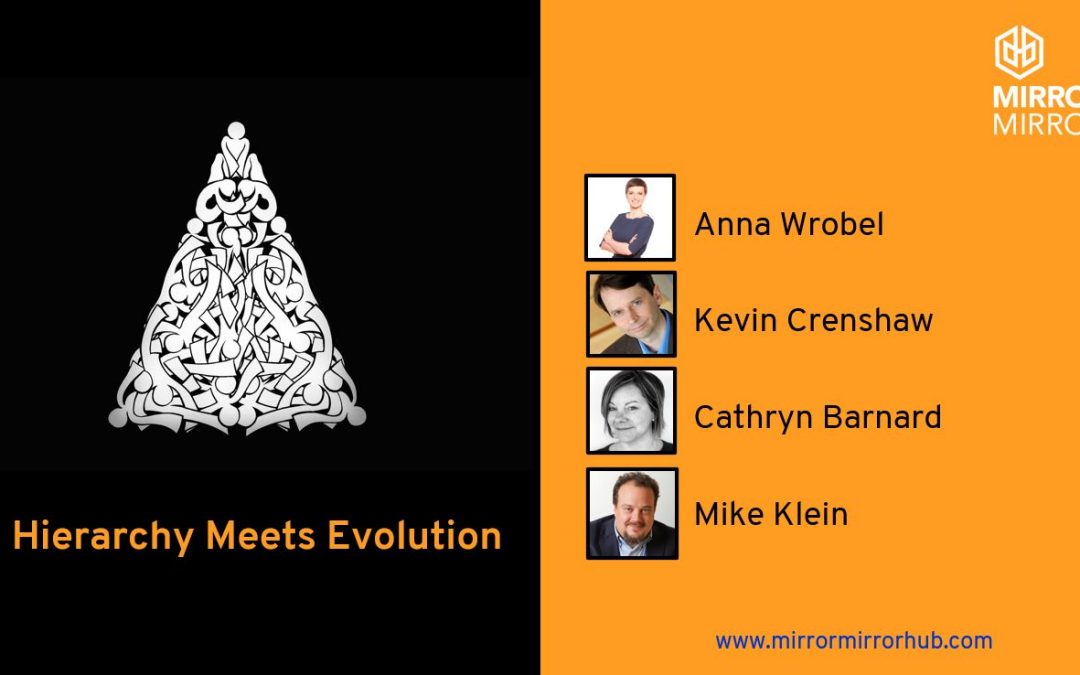 “Is there a future for hierarchy?”  That was the question last week as a transatlantic panel of leadership and communication experts gathered for a discussion hosted by Mirror Mirror.  Starting from the east, Poland’s Anna Barbara Wrobel, Cathryn Barnard from the UK, Iceland-based Mike Klein, and American Kevin Crenshaw accepted that hierarchy will likely remain the world’s dominant paradigm for leading organizations, and that the real opportunity lies in blending it with an empowering leadership style at the team level.  Watch the podcast full here.

Anna, was McKinsey’s first organizational consultant in Central and Eastern Europe before setting up her own practice in 2013. She kicked off the conversation by saying she sees hierarchical structures remaining in place, but that they would increasingly be tempered with more interactive and empathetic ways of management thinking.

Anna explained that from a Polish/Central European perspective, the combined influences from multinationals who built or took over large enterprises after the fall of the Berlin wall and from local traditions of bottom-up entrepreneurship brought a mix of cultures. “I think you can see those types mixing as long as leaders are conscious about what they are doing.”

“I don’t think the question is one between hierarchy and empowerment, hierarchy and freedom – but one about looking at what it would take to make a hierarchy empowering so that it has the advantages of stability, safety and clarity along with speed and agility. Those are the organizations where we live in practice.”

A key part of the reason why the participants believe that it would be better to temper hierarchy and ensure that it empowers innovation and performance rather than suppressing them is that good alternatives to hierarchy tend to occur sporadically and are hard to replicate, while alternatives can be contrived and cumbersome. In citing self-governing teams in software design as one good option, he also said that in other cases, like Zappos whose much-publicized alternative called Holacracy has failed to take off:

Mike’s alternative was not to improve the outlook of a hierarchy per se, but use it to improve the visibility of the broader organization and identify the internal influencers, citing that three percent of people drive 90% of internal conversations.

Kevin added that the way forward is for organizations to rededicate themselves to developing new generations of empowered leaders, and also for there to be active steps to ensure adequate degrees of accountability and responsiveness. However, Mike pointed to a number of examples where hierarchy can take on monarchical trappings and where status overrules initiative and strategic judgement.

“The arrival and centrality of the Internet has been an equalizer and an accelerator of change in the workplace”, added Cathryn. “The Internet has given every one of us a platform and a voice and also the ability for people to learn about what is happening more broadly in the world. It’s like a tsunami of information about what makes a good workplace, but too many leaders have an old-fashioned understanding of how the world of work works.

Noting a closing comment that “hierarchy needs to be optimized rather than eliminated”, Lindsay Uittenbogaard, event sponsor and Director of Mirror Mirror said

“this was a session that recognized both the resilience of hierarchy and the need to make sure it both aligns and can drive alignment with organizational reality. Hierarchy is evolving – and it needs the right kind of tools and leadership to evolve in the right direction.”