The Fog of Misalignment

People can be working together while living in different realities because everyone interprets the world in their own way and behaves according to their own logic. Assumptions, misunderstandings, habits, biases – these often sit under the radar, creating expensive alignment issues that undermine motivation and performance.  We call it The Fog.

Fog is inevitable simply because people see things differently and their brains aren’t automatically connected to form a single ‘truth’.  What we think as individuals, and the way groups of people come to understand meaning together, are linked by many thousands, or millions of lines of communication that jump through multiple filters, distorting as they go. The lines of logic have been infected by our prior experience going back to childhood or birth, and have been passed down into our world view from generations past. 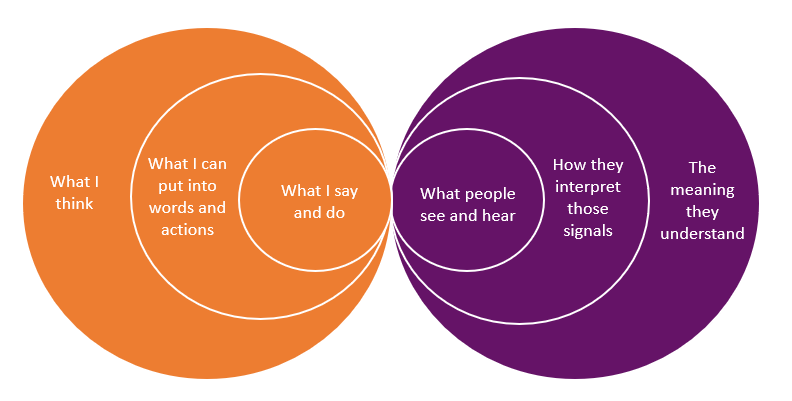 Filters through which communication lines jump

This is not new, but it’s easy to forget how impactful it is.

When you come to many people in teams and organizations, it’s not just the distortion of meaning we contend with, it’s what CAN be shared and what people CHOOSE to share – consciously or unconsciously.  Some of the resulting fog is unavoidable and the more complex the situation, the more ambiguity and uncertainty there is.  However, much of the fog is avoidable.

The Cynefin framework is a sense-making tool to help managers identify which one of five decision-making contexts they are in, between simple and chaotic. It can be used to clear that particular layer of fog.  There are, however, many more layers of fog, from strategic to tactical, behavioural to actionable.

It’s all about identifying the alignment gaps

Clearing the fog is about identifying and addressing alignment gaps.  Doing this enables better strategy implementation as contexts become clearer, not just to one person but between groups of people with a shared challenge. It doesn’t have to be expensive or time consuming and is powerful when done correctly because:

And that’s the basis of preparedness: a team of people who have a shared understanding about their challenges and how they will overcome them, who are empowered to make collective decisions and communicate in a safe, clear and constructive way.  This team can simply deliver better together.

You can try to clear the fog through straight dialogue but risk getting tied up in knots sorting out the complexities of how different people perceive their whole contexts. Mirror Mirror is a structured, data-driven process that finds the divergence and convergence between people in teams, and then builds more clarity and compatibility in a focused, objective, safe and constructive way.

Not everyone wants to clear the fog

One look at Lencioni’s five dysfunctions of a team will remind you why a certain proportion of the working population prefer to use fog to their advantage:

Not all of this comes with bad intentions. Fog protects people from knowing things it may be harmful to know.  Fog helps avoid conflict. Fog is diplomatic.

And that can change too

A powerful way to change how people manage these fears is not to name it, but to show them a better alternative.  It’s about exposing where ‘we’ is better than ‘me’.  It’s about showing how the non-emotional sharing of perspectives can reveal productive learning insights rather than threatening differences of opinion. It’s about showing why low levels of competence in certain areas is OK when you have people on your team who can compensate with their strengths. And it’s about how to use respect to build trust, commitment, empowerment and inter-dependency. A culture bubble  can be set up to allow this change.

Contrary to popular opinion, team integration and alignment is not necessarily difficult, scary or costly with the right approach and with leaders who genuinely support.