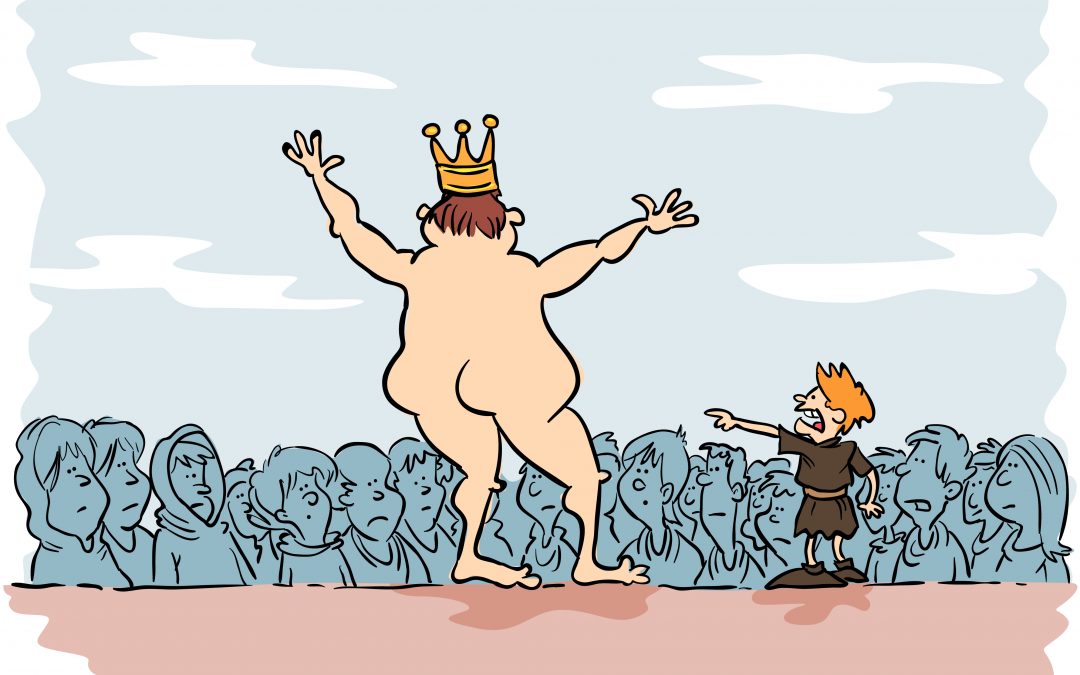 Finally, Henry’s day has come. He is the CEO of a global organization and is ready to reveal the new, long-awaited Strategy.  Metaphorically speaking, it is a fine Cloak a made of red velvet, gold trim, and sparkly gold sequins. The company is called ‘MyKloth’, and essentially the strategy is a new customer promise: to fulfill any bespoke clothing order within 24-hours.

The strategy ‘reveal’ is massive. Publicity is being organized worldwide to the public, to investor relations, and to partners – as well as to all employees of course. Henry doesn’t mind being the front man to model the strategy demo for this purpose because it’s a great gimmick: “Look what the King of MyKloth wanted.”  It’s full of creativity, it has a cheeky sarcasm, and it radiates a personal pride. And he is proud of the new brand, which inspires people to wear their own designs, under the strapline: “Wear your imagination”.

The online hype had already begun the morning beforehand. Yesterday at 10.00am, Henry was filmed ‘live’, going to the company website to self-design and order his own bespoke item of clothing. The broadcast showed him choosing the cloak colour, style, and materials, and making it especially big, long, and glitzy.

Since then, a film crew has been recording the fulfilment process, starting in the materials warehouse and moving to the production line. They didn’t find it difficult to capture the dedication, efficiency, and teamwork of the staff involved as the Cloak moved from stitching to decoration, from quality control to packaging.

If the Cloak didn’t arrive by 10.00am today, the whole communications plan would fall flat. And he wanted it to work more than anything. He wanted to reward everyone who had got the company this far. And he wanted to create a huge future for the business. And of course, the whole process was being tracked. He was assured the Cloak would arrive at 9.50am as planned.

The strategy concept and the plans around how it would be implemented had mainly come from the MyKloth employees themselves.  He could completely trust that they would keep the brand promise, no matter what. Each member of staff knew that if they hit on a problem that would negatively affect either their own boundaries or customer fulfilment, they could raise it right away and a solution would be found.

The strategy launch was tremendously exciting for everyone involved. And the big event was minutes away. It was 9.35 and all he had to do was wait so, he sat down and took a moment to reflect.

It was four years ago that he and Paul, the Director of Communications, first sat down to look at practical ways they could involve employees in making decisions and recommendations.  At that point, morale was low and engagement figures, just like most other companies, were in decline.  Henry wanted everyone to own a collective mission. But first, he wanted to really get under the skin of what successful ownership meant so they could get this part right.

What he and Paul noticed was that the biggest barrier to performance was misalignment – or not taking the opportunity to fully align. They saw assumptions, misunderstandings, interpretations, personal biases, and social and environmental influences – all leading to wasted time, frustration and cost.  He and Paul called this ‘The Fog’.

“It’s all very well our sending out strategy messages – but we need be able to include staff perspectives and understand what they need to deliver. This has got to be a two-way conversation.”

They realised that they needed to listen to employees so they could include their views, then set out the strategy in a clear and simple way before re-engaging with then to spot and address any alignment gaps.

“We’ll need to give them a good feeling of safety that whatever they say is ok and that there won’t be any negative ramifications of sharing thoughts and ideas.”

They agreed to set up dialogue sessions, and alongside this, employee communication activities were still to take place: video interviews, articles, visuals etc.

With all of that done, the whole company was prepared to make the strategy work.

It was 9.50, Henry’s assistant opened the door to his office and gave him a nod. The package had arrived. Henry walked through the double doors to the adjoining room where he knew the camera feed was live.

“Fantastic – it’s here at last!”  He exclaimed, just like a King would (or so he imagined).

He opened the package and took out the Cloak, beaming with delight.

“This is JUST what I wanted!” he said and flung the Cloak, with it’s ruby plated clasp, around his neck. And just as planned, he continued “I am delighted to announce that MyKloth will make and deliver any article, anywhere, anytime – within 24 hours.  This is our promise – so you can wear what EVER you want!”

At that moment, a drum beat started up and everyone in the room pulled out their own packages from behind their backs and under the tables. They started ripping them open – some had hats, some had scarves, some had capes…  they were putting them on, laughing. Henry was completely taken by surprise.

“What’s going on?” he asked, with a big, excited and slightly nervous smile, wondering what was going to happen next.

“Surprise! It’s party time” yelled someone at the back and the music turned into a rocking dance track.  Henry beamed at everyone and thought

All employees had been free to order their own garment over the past two weeks to trial the new delivery processes. Of course, this was planned behind Henry’s back, so the moment of genuine surprise on his face could be caught on camera for the strategy launch. (Paul’s idea – he knew Henry would he’d be ok with it).

The communications went fantastically, exceeding all expectations of shares, likes and coverage. Sales went through the roof. The recruitment department tripled to handle all the new staff needed. Henry was immensely proud of everyone involved. MyKloth did indeed prosper. The company went on to retain the No. 1 position in the bespoke clothing market for many years to come.